Inflammatory Bowel Disease, more commonly known as IBD is an automimmune disease. In lamens terms, this means that your immune system attacks the healthy cells in your body by mistake. There is NO CURE for Inflammatory Bowel Disease at this time, but medications are used to treat symptoms and many patients (the lucky ones) can experience long periods of remission.

That being said, Crohn's Disease and Ulcerative Colitis don't always affect patients in the same way. This makes IBD particularly difficult treat, as what works for one patient, will not necessarily work for another.

Most people assume IBD is 'just a toilet disease', but it does in fact have a vast array of extraintestinal manifestations, meaning they are situated or occurring outside of the intestines.

These are diseases known to be associated with IBD that occur beyond the gastrointestinal tract, such as:
Musculoskeletal: joint and muscle pain
Dermatological: skin inflammation, rashes, and irritation
Hepatobiliary: inflammation of liver, bile ducts, and gall bladder
Ocular: eye inflammation (uveitis or iritis)
Kidney Stones
Fistulas
Deep Vein Thrombosis
A more detailed description of these is available on the IBD Clinic site. 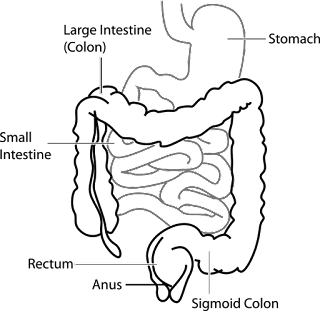 Visit our 'IBD terms unmasked' section for more info on different terms that you may not fully understand. Check out our FAQ page for Frequently asked questions and IBD myths. You may also find this blog useful: "What people with IBD should know".

Crohn's Disease
Crohn’s Disease is a condition that causes inflammation of the digestive system or gut. Crohn’s can affect any part of the gut, though the most common area affected is the end of the ileum (the last part of the small intestine), or the colon.

The areas of inflammation are often patchy with sections of normal gut in between. A patch of inflammation may be small, only a few centimetres, or extend quite a distance along part of the gut. As well as affecting the lining of the bowel, Crohn’s may also go deeper into the bowel wall.

The main types of Crohn's Disease:

Terminal ileal and ileocaecal
Crohn’s in the ileum (the last part of the small intestine) may be called ileal or sometimes ‘terminal ileal’ Crohn’s – because it is affecting the terminus or end of the ileum. If it also affects the beginning of the large bowel it is known as ileocaecal Crohn’s. With this type of Crohn’s, you may feel pain in the lower right side of your abdomen, especially after eating. There is often weight loss, and you may have diarrhoea. Because Crohn’s in the ileum can make it difficult for your body to absorb bile salts, and bile salts can irritate the bowel lining, the diarrhoea may be watery. It is unlikely to be bloody, as any blood lost will be digested by the time it reaches the rectum. About four out of 10 people with Crohn’s have ileal or ileocaecal disease.

Small bowel
Abdominal pain and diarrhoea are also common symptoms of Crohn’s further up the small bowel. Again, the diarrhoea is unlikely to be blood-stained, but you may still have weight loss and anaemia. Nearly a third of people with Crohn’s have it in the small bowel.

Colonic or Crohn's Colitis
Crohn’s Disease in the colon (large intestine or large bowel) is often called Crohn’s Colitis. This is also a common form of Crohn’s disease. The main symptom tends to be blood stained diarrhoea. Because of the inflammation, the colon cannot hold as much waste as normal and you may have very frequent bowel movements, especially if your rectum is inflamed.

Oral Crohn’s
Crohn’s can occasionally affect the mouth. True oral Crohn’s, which typically causes swollen lips and mouth fissures, is rare. However, about one in five people with Crohn’s has a tendency to develop mouth ulcers.

The inflammation usually begins in the rectum and lower colon, but it may affect the entire colon. If UC only affects the rectum, it is called proctitis, while if it affects the whole colon it may be called total colitis or pancolitis.

The main types of Ulcerative Colitis:

Proctitis
In proctitis, only the rectum is inflamed. This means that the rest of the colon is unaffected and can still function normally. For many people with proctitis, the main symptom is passing fresh blood or blood-stained mucus. You may get diarrhoea, or you may have normal stools or even constipation. You may also feel an urgent need to rush to the toilet. Some people with proctitis often feel that they have an urge to pass a stool, but cannot pass anything because the bowel is actually empty. This is called tenesmus. In some people, the sigmoid colon (the short curving piece of colon nearest the rectum) may also be inflamed – a form of UC sometimes known as proctosigmoiditis. The symptoms are similar to those of proctitis, although you are less likely to have constipation with proctosigmoiditis.

Left-sided (or Distal) Colitis
In this type of UC, the inflammation starts at the rectum and continues up the left side of the colon (also known as the distal or descending colon). Symptoms include diarrhoea with blood and mucus, pain on the left-hand side of the abdomen, urgency, and tenesmus.

Extensive / Total Colitis / Pancolitis
Extensive colitis extends along most of the colon. Extensive colitis that affects the whole colon may be called total colitis or pancolitis. Extensive or total colitis can cause very frequent diarrhoea with blood, mucus, and sometimes pus. You may also have severe abdominal cramps and pain, tenesmus, and weight loss. In milder flare-ups, the main symptom may be diarrhoea or looser stools without blood. Very rarely, when the inflammation is severe, digestive gases may get trapped in the colon, making it swell up. This is known as toxic megacolon and it can cause a high fever as well as pain and tenderness in the abdomen. It is essential to get treatment quickly for this condition, as it may need surgery.